Mark Abley grew up in Ontario, Alberta and Saskatchewan. He studied literature at the University of Saskatchewan and, after winning a Rhodes Scholarship, at St. John’s College, Oxford. Among his books are Beyond Forget: Rediscovering the Prairies (1986); Spoken Here: Travels Among Threatened Languages (2003); and The Prodigal Tongue: Dispatches From the Future of English (2008). He writes a language column for the Montreal Gazette. 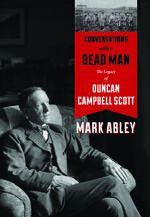 Conversations with a Dead Man