James Bacque
James Bacque is a novelist, book editor, essayist and historian whose work has helped raise awareness in human rights issues associated with war crimes, particularly spurring debate on and research into the treatment of German POWs at the end of World War II.
His fiction titles include The Lonely Ones, 1969 (Big Lonely in the paperback edition, 1970); A Man of Talent, 1972; Creation (with Robert Kroetsch and Pierre Gravel), 1972; The Queen Comes to Minnicog, 1979; and Our Fathers’ War, 2006. His history titles include Crimes and Mercies, an immediate bestseller upon release, and Other Losses. 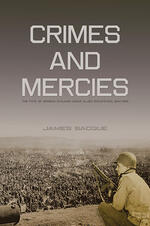