Mireille Baulu-MacWillie obtained her Ph.D. from the Université de Montréal and dedicated her forty-five-year career to the field of education. In her first twenty-five years, she taught students at all academic levels: primary school, high school, and community college. She also held the administrative position of principal in a public school. She spent the last twenty years of her career at Université Sainte-Anne in Nova Scotia as a professor of education preparing students for the teaching profession. She has written many scholarly articles and two books, some of these in collaboration with colleagues. She has had a lifelong interest in reading about Holocaust survivors and rescuers since the age of thirteen and tried to read every book or document she could find on the subject. She considers that the project of writing Philip Riteman’s story has been a great responsibility, an extraordinary privilege, and a profoundly enriching experience. He was the first survivor she had ever met in person. She is grateful that he chose to let her write his story when he had been asked by others over the years to allow them this opportunity. She has developed an undying admiration and respect for Mr. Riteman’s determination to survive and the courage to tell his story. 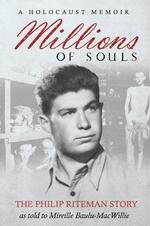