Barbara Belyea has lived, studied and worked in Britain, France and Switzerland as well as in several provinces of Canada. During graduate school she was introduced to editing and medieval literature; her interest in editions of manuscripts, combined with years of hiking and skiing in the Rocky Mountains, led her to edit David Thompson’s Columbia Journals. She is also interested in Amerindian and fur trade cartography. 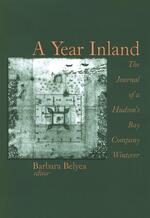