Mark R. Brawley is Professor of Political Science at McGill University in Montreal. He has taught at McGill since 1990, except for 2000-2001, when he was a visitor at Harvard's Department of Government. He is the author of several books including Afterglow or Adjustment? (Columbia University Press, 1999) and Power, Money, and Trade: Decisions that Shape Global Economic Relations (University of Toronto Press, 2005). 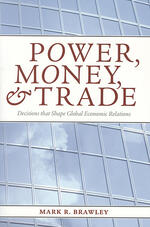