In a few short decades before the First World War, Calgary was transformed from a frontier outpost into a complex industrial metropolis. With industrialization there emerged a diverse and equally complex working class. David Bright explores the various levels of class formation and class identity in the city to argue that Calgary’s reputation as a prewar centre of labour conservatism is in need of revision.

Bright also delineates the trials of the Calgary labour movement in the 1920s. Internal divisions and dissent prevented the movement from realizing the potential strength of the working class. Instead, even as local capitalism restructured itself, political and industrial labour organizations wilfully fragmented their own base of support. In particular, they failed to address the concerns and needs of the growing number of unemployed in the city, a neglect that foreshadowed events of the 1930s.

This failure left the labour movement unable to meet the challenge of the Great Depression. In part, at least, the demise of labour as a viable political alternative in Calgary paved the way for the rise of Social Credit.

Using Calgary as a model, The Limits of Labour reasserts the need to place class formation at the heart of the development of western Canada and provides an historical context to the renewed struggle of labour for social justice in the 1990s. 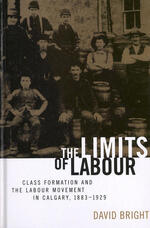 The Limits of Labour