Jamie Brownlee is currently working on his dissertation at Carleton University in Ottawa. He is part of a new collaborative program where he will obtain a PhD in sociology with a specialization in political economy. This focus aligns with his research and teaching interests in Canadian and international political economy, political sociology, social theory and the sociology of education.

Jamie obtained his Master of Arts at the University of Manitoba. His MA thesis research explored how the economic elite cooperate to control state and national policy, and was later revised and published as Ruling Canada: Corporate Cohesion and Democracy. His doctoral research, supervised by Dr. Wallace Clement, builds on this work through examining the influence of corporate power in the educational sphere. This research on the “corporatization of the university” will demonstrate the multiple and significant impacts of the elite agenda to reform Canadian universities to integrate them more closely with the priorities of Canadian capital.

Jamie has received numerous academic awards, including SSHRC’s Canada Graduate Scholarship for doctoral students who have achieved academic excellence in their field. He has taught at the undergraduate level on corporate power and social movements, and has developed two research manuals for the University of Manitoba’s Global Political Economy program. 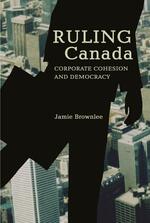