Deborah Carr's articles have appeared in Saltscapes, Progress, Nature Canada, Wildlife Canada, and Homemakers Magazine. As a child, she watched Mary Majka's television show, Have You Seen. Her first home as a married woman was on Caledonia Mountain, where she encountered the formidable Mary Majka more than twenty years ago. 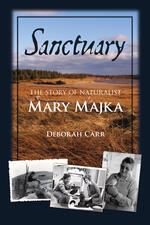