Rosie Chard grew up on the edge of London, England. After studying Anthropology and Environmental Biology at university she went on to qualify as a landscape architect and practiced for several years in England, Denmark and Canada. She and her family emigrated to Winnipeg in 2005 where she trained as an English language teacher at the University of Manitoba.

Rosie is now based in Brighton, England where she currently works as a tutor on The Creative Writing Programme Brighton, and also as a freelance editor, writing mentor and English language teacher. Her first novel, Seal Intestine Raincoat, published in 2009 by NeWest Press won the 2010 Trade Fiction Book Award at the Alberta Book Publishing Awards and received an honorable mention at the Sunburst Fiction Awards. She was also shortlisted in 2010 for the John Hirsch Award for Most Promising Manitoba Writer. Her second novel, The Insistent Garden, published in 2013 by NeWest Press, won the Margaret Laurence Award for Fiction at the Manitoba Book Awards.

She is currently writing her fourth novel. 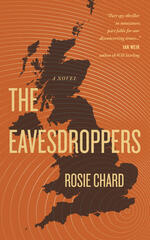