Bruce Cinnamon was born in Edmonton and grew up just downstream in Fort Saskatchewan, along the banks of the North Saskatchewan River. He holds a BA in English and Creative Writing from the University of Alberta and a Master of Global Affairs from the University of Toronto. His favourite authors and literary influences include Garth Nix, Haruki Murakami, Jorge Luis Borges, Rachel Carson, Thomas King, Tomson Highway, and Italo Calvino. The Melting Queen is his first novel./p 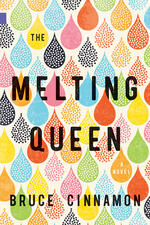