Wayne Clifford was born in Toronto in 1944. He studied English at University College at the University of Toronto in the mid sixties during which time he came to be associated with a small coterie of students that included Stan Bevington, Dennis Reid, Doris and Judith Cowan, and David Bolduc. Wayne also remembers Tangiers Al, but not clearly, which says something about the time. While still an undergraduate Clifford won numerous Norma Epstein prizes for his poetry and also one E. J. Pratt Award (1967) that he shared with Michael Ondaatje. (One poet kept the money, the other, the medal. In the end each felt equally cheated.)

Stan Bevington had started his fledgling Coach House Press in 1964 and asked Clifford to acquire a few poetry manuscripts suitable for book production of an experimental sort. Wayne secured early work from George Bowering, Victor Coleman, bpNichol and Michael Ondaatje. At the founding meeting of the League of Canadian Poets (1966) Wayne proposed a Writers` Anonymous akin to other, similar, twelve-step programmes. Clifford`s idea was not seriously considered. Shortly thereafter, Clifford left Toronto to pursue graduate studies in creative writing at the University of Iowa. Clifford began working at St. Lawrence College in Kingston in 1969, when the College was just new, and was involved in the Creative Writing program and the Fine Arts Program, until both were discontinued in the 1980s. Clifford then joined the General Arts & Science Program (GAS -- and yes, he does enjoy this irony of this acronym) and began teaching remediation in language. He retired in June of 2004. He was working on a poetry collaboration (unpublished) with bpNichol at the time of bp`s death in 1988. 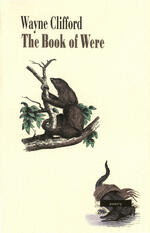 The Book of Were