Do Glaciers Listen? explores the conflicting depictions of glaciers to show how natural and cultural histories are objectively entangled in the Mount Saint Elias ranges. This rugged area, where Alaska, British Columbia, and the Yukon Territory now meet, underwent significant geophysical change in the late eighteenth and nineteenth centuries, which coincided with dramatic social upheaval resulting from European exploration and increased travel and trade among Aboriginal peoples.

European visitors brought with them varying conceptions of nature as sublime, as spiritual, or as a resource for human progress. They saw glaciers as inanimate, subject to empirical investigation and measurement. Aboriginal oral histories, conversely, described glaciers as sentient, animate, and quick to respond to human behaviour. In each case, however, the experiences and ideas surrounding glaciers were incorporated into interpretations of social relations.

Focusing on these contrasting views during the late stages of the Little Ice Age (1550-1900), Cruikshank demonstrates how local knowledge is produced, rather than discovered, through colonial encounters, and how it often conjoins social and biophysical processes. She then traces how the divergent views weave through contemporary debates about cultural meanings as well as current discussions about protected areas, parks, and the new World Heritage site. Readers interested in anthropology and Native and northern studies will find this a fascinating read and a rich addition to circumpolar literature. 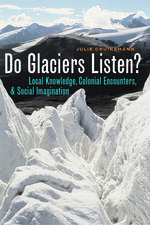