Dawn Dumont is a Plains Cree comedian and actress born and raised on the Okanese First Nation in Saskatchewan, Canada. Dawn has made people laugh at comedy clubs across North American, including New York’s Comic Strip, the New York Comedy Club, and the Improv. She began her comedy career in Toronto on stages such as Yuk Yuk’s and the Laugh Resort. Dawn is currently a comedy writer for CBC Radio and the Edmonton Journal, and is a Story Editor for By the Rapids, an animation comedy series on APTN. Dumont’s writing has been published in the anthologies Native Women in the Arts and Gatherings, as well as in Rampage Literary Journal. Her personal essay “Transformations” was published by Toronto’s Now Magazine. Most recently her play, Nicimis (Little Brother) was workshopped at Native Earth’s Performing Arts Weesageechak Begins to Dance Festival in Toronto, with artistic director Alanis King. She lives in Edmonton, Alberta. Nobody Cries At Bingo published by Thistledown Press in 2011 is a rare and beautiful fictional memoir of her growing up in the culture of the Okanese First Nation. 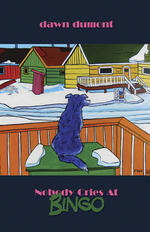 Nobody Cries at Bingo