Mark Forsythe is the long-standing host of CBC Radio One's BC Almanac and co-author of The BC Almanac Book of Greatest British Columbians. Raised in Toronto, Forsythe moved to BC in the mid-seventies and has come to know the province well through broadcasting assignments in Smithers, Prince George, Prince Rupert, the Okanagan and Vancouver. 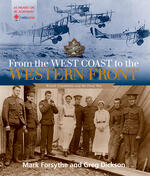 From the West Coast to the Western Front