Aaron Freeman is a writer and advocate on democratic reform and corporate accountability issues. His regular political column, "Money and Influence," is published in The Hill Times, Canada's parliamentary newspaper, and his work often appears in Canada's leading newspapers and publications. A former "Nader's Raider" at Ralph Nader's Center for the Study of Responsive Law in Washington, D.C., Aaron was also a founding director of Democracy Watch, Canada's leading democratic reform advocacy organization, for which he served on the board for eleven years. Aaron lives in Ottawa where he operates a policy and communications consultancy that assists non-profit organizations. He is a part-time faculty member teaching the law of Canadian democracy at the University of Ottawa's Faculty of Law. He is a graduate of McGill University and the University of Ottawa's Faculty of Law. 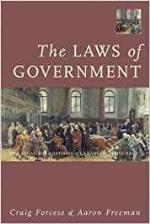 The Laws of Government