Charles Sydney Frost was born in Nova Scotia in 1893. He was working in St. John’s at The Bank of Nova Scotia when the First World War began in August 1914, and joined the newly revived Newfoundland Regiment on August 21, 1914, the first night that volunteers were accepted. Assigned Regimental Number 58, he became one of the First Five Hundred, often known as the Blue Puttees. He served with the regiment throughout the entire war, rising from the rank of private to that of captain. Frost returned to The Bank of Nova Scotia at the end of the war and rose steadily through its ranks. He became its president and chief executive officer in June 1956 and retired as president in 1958 at the age of sixty-five. He remained a director until January 1969, when he became an honorary director. He died in 1985 at the age of ninety-two. 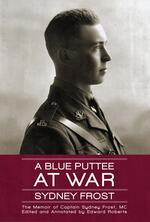 A Blue Puttee at War