JONATHAN GARFINKEL is an award-winning playwright and author. His play House of Many Tongues was nominated for the Governor General’s Literary Award for Drama, and The Trials of John Demjanjuk: A Holocaust Cabaret has been performed across Canada, Russia, Ukraine, and Germany. His memoir, Ambivalence: Crossing the Israel/Palestine Divide, has been published in numerous countries to wide critical acclaim, and his long-form nonfiction has appeared in The Walrus, Tablet, the Globe and Mail, and PEN International, as well as Cabin Fever: An Anthology of the Best New Canadian Non-Fiction. Named by the Toronto Star as “one to watch,” Garfinkel is currently pursuing a Ph.D. in the field of Medical and Health Humanities at the University of Alberta, where he is writing a memoir about life with type 1 diabetes and the revolutionary open-source Loop artificial pancreas system. He lives in Berlin. 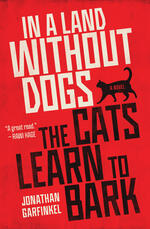 In a Land Without Dogs the Cats Learn to Bark