MAUREEN GARVIE is a former teacher, journalist and librarian who now works as an editor for McGill-Queen’s University Press. She grew up in Kingston, Ontario, and returned there after a long stint living and teaching in New Zealand. She is the author of three books for young readers, including George Johnson’s War, co-written with Mary Beaty (Groundwood, 2002), Lake Rules (Key Porter, 2005) and Amy by Any Other Name (Key Porter, 2009). Maureen now lives in Kingston on the shores of the St. Lawrence, in the same house where she grew up. 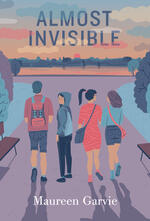