Edgar Gold, CM, AM, QC, PhD, DSc (hc), FNI, had a first career at sea for sixteen years and was in command of a variety of ships for several years. He then studied law and holds an LLB from Dalhousie University, Halifax, and a PhD in international maritime law from the University of Wales in Cardiff. He was professor of maritime law at Dalhousie for many years, and also practised with a prominent Halifax law firm. He is a past president of the Canadian Maritime Law Association and a titulary member of the Comité Maritime International. He is a former member of the Board of Governors and visiting professor at the World Maritime University, Malmö, Sweden, and the International Maritime Law Institute in Malta. Until 2012 he was an adjunct professor at the TC Beirne School of Law, University of Queensland, Brisbane, Australia, where he now lives. He has extensively published, lectured and advised governments on maritime law and related fields. Among other honours, he has been awarded the Order of Canada, the Order of Australia, Germany’s Commander’s Cross of the Order of Merit, and honorary degrees from the Canadian Coast Guard College and the World Maritime University. 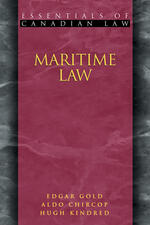