John W. Graham is a former Canadian ambassador whose postings in the foreign service and subsequently with international organizations took him to exotic, often uncomfortable, and sometimes remote parts of the world. Many assignments were in Latin America and the Caribbean, but ranged widely from Bosnia and Eastern Europe to the West Bank and Central Asia. In various times and places He was High Commissioner (Guyana), Director General for the Caribbean and Central America, Ambassador (Venezuela and the Dominican Republic), first head of the Unit for the Promotion of Democracy in the Organization of American States (OAS), international mediator in a major crisis in the Dominican Republic and a senior elections officer immediately following the Bosnian war, and leader of five election observation missions and participant in many more. He is a member of The Friends of the Inter-American Democratic Charter and former chair of the Canadian Foundation for the Americas (FOCAL). 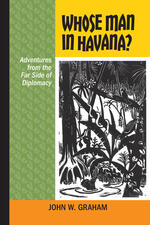 Whose Man in Havana?