Originally from St. Paul, Alberta, Lisa Grekul has lived in Mbabane (Swaziland), Toronto, Edmonton, and Vancouver. She completed her B.A. and M.A. degrees at the University of Alberta, and she holds a Ph.D. from the University of British Columbia. Now residing in Kelowna, she teaches Canadian literature in the Department of Critical Studies at the University of British Columbia-Okanagan. Balancing a talent for fiction and skill for scholarly inquiry, Grekul's published works investigate the role and place of fourth- and fifth-generation Ukrainians in Canada. Leaving Shadows: Literature in English by Canada's Ukrainians (University of Alberta, 2005) is her second book; her first, Kalyna's Song (Coteau, 2003), was shortlisted for the Amazon.ca/Books in Canada Best First Book Award and the inaugural Kobzar Literary Award. Currently, she is at work on a book- and film-project, (Con)temporary Nomads: Canadian Autobiography and the Search for Home, focused on Eastern European diasporic communities in Canada. 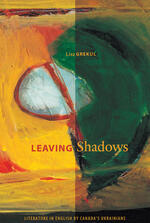