Elizabeth Hay was born in Owen Sound, Ontario. Hay has worked as a CBC broadcaster in Yellowknife, Winnipeg, and Toronto, and as an author writing in Mexico, New York, and Ottawa. She is the 2002 recipient of the Marian Engel Award in recognition of her illustrious body of work, has twice been nominated for the Governor General’s Literary Award, and is the winner of the 2007 Scotiabank Giller Prize for her novel Late Nights on Air. 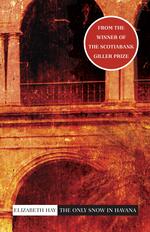 The Only Snow in Havana