Maureen Jennings is the author of the Murdoch Mysteries, a historical series set in Victorian Toronto. The first book, Except the Dying, won the Certificate of Commendation from Heritage Toronto. CHUM television has ordered the creation of an exciting new 13-episode series, The Murdoch Mysteries, based on these novels. The K Handshape is the second in Maureen's new series featuring Christine Morris. The first, Does Your Mother Know? (Dundurn, 2006), is currently in its second printing. Maureen lives in Toronto with her husband and two dogs. 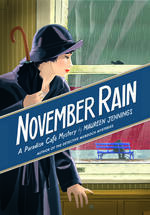