Elaine Kahn, born and raised in Oshawa, Ontario, was in 10th grade when Trudeau became prime minister in 1968 and was, like so many of her generation, enthralled. She was also fascinated by McLuhan’s work in mass media. She did her undergraduate studies at the University of Toronto and became a journalist. After emigrating to the US with her family, she earned a doctorate in global affairs from Rutgers University. 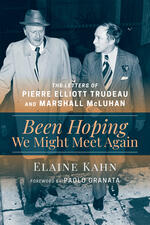