Conrad Kain, mountaineer (b 10 Aug 1883 at Nasswald, Austria; d 2 Feb 1934 at Cranbrook, BC). Conrad Kain is considered one of the most daring climbers of his generation. Dubbed "Canada's First Super-Guide," Kain was a rogue guide that did more demanding climbs than the Swiss Guides. Kain was born in Austria to a poor family that lived in dire circumstances. His father died when he was a young boy, and he did much to support his family as a goatherder and quarryman, poaching animals when money was tight. Kain discovered early on that his real passion was being in the mountains, climbing and guiding. He received his guiding certificate (or "Fuhrerbuch") in 1906 when he was 23 years old. Source: http://www.thecanadianencyclopedia.com/articles/conrad-kain 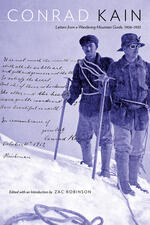