Norman Levine was born in Ottawa in 1923. During World War II, he served in the RCAF with a Lancaster squadron based in Yorkshire. He subsequently studied at Cambridge and McGill Universities, receiving his M.A. from McGill University in 1949. In 1949 he was awarded a fellowship to do post-graduate work at King`s College, London. He left Canada with the manuscript for his first novel under his arm and spent the next 31 years in England, mainly in St Ives, Cornwall. He returned to Canada briefly from 1965-66 when he was the first writer-in-residence at the University of New Brunswick. 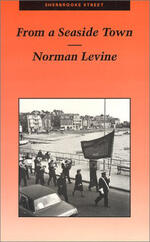 From a Seaside Town