Sanctuary, Sovereignty, Sacrifice closely examines sanctuary practice in Canada. Randy Lippert suggests that, far from being a coherent social movement, sanctuary practice is a localized and isolated phenomenon, and often not primarily religious in orientation. It is also remarkably successful – in every documented incident, state authorities were kept at bay and providers avoided arrest. In most cases, migrants also ultimately received legal status.

Drawing on theories of governmentality, Lippert traces the emergence of this practice to a shift in responsibility for refugees and immigrants from the state to churches and communities. Here sanctuary practices and spaces are shaped by a form of pastoral power that targets needs and operates through sacrifice, and by a sovereign power that is exceptional, territorial, and spectacular. Correspondingly, law plays a complex role in sanctuary, appearing variously as a form of oppression, a game, and a source of majestic authority that overshadows the state.

A thorough and original account of contemporary sanctuary practice, this book tackles theoretical and methodological questions in governmentality and socio-legal studies concerning methodology, nonliberal power, the role of legal narratives, and the nature of resistance.

Sanctuary, Sovereignty, Sacrifice will be of interest to scholars and students in socio-legal studies, criminology, sociology, political science, social history, anthropology, and religious studies, and will appeal to anyone interested in immigration and refugee law and policy. 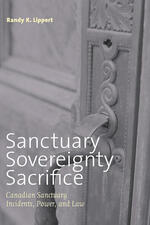