As the son of an airline employee, Peter Pigott grew up at the edge of airports around the world, including Santa Cruz, Bombay, London and Montreal. He attended the University of Montreal Teacher's College (B.Ed.) and Loyola College in Montreal (B.A.). and then went on to receive a M.A. from the University of Vermont in Burlington USA and a diploma in history at Oxford University in England.
Pigott joined the Canadian Department of Foreign Affairs in 1978 and has served at embassies in New York, Hong Kong, Vienna and The Hague. He returned to Ottawa in 1993 and began his writing career, specializing in books about aviation.
Also by Peter Pigott: The Official History of Aviation in Hong Kong, Flying Canucks! Famous Canadian Aviators, Hong Kong Rising: The History of a Remarkable Place, Gateways: Airports of Canada, Flying Colours: Commercial Aviation in Canada, Flying Canucks II: Famous Canadian Aviators 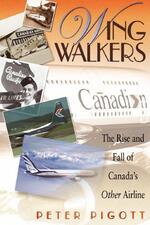