Al Pittman’s writing has been featured in many publications and has been the subject of radio, television and film documentaries. He has given public readings of his work in Canada, the United States and Europe. Among his many literary awards is the Arts Council’s Lydia Campbell Award for Creative Writing in 1985, which Pittman was the first to receive, and the Writers’ Alliance of Newfoundland and Labrador Book Award for Poetry in 2001. Al Pittman was inducted into the Newfoundland and Labrador Arts Council Hall of Honour in 1999. Al Pittman died in August of 2001 at the age of sixty-one. 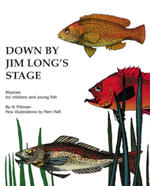 Down by Jim Longs Stage