Michael Wilson was a Canadian businessman, politician, diplomat, and mental health advocate. As an investment banker, he held senior roles at Royal Bank of Canada, UBS Canada, and Barclays Capital Canada. He was a Member of Parliament from 1979 to 1993, serving as Minister of Finance and Minister of International Trade under Brian Mulroney. He also served as Canadian Ambassador to the United States and Chancellor of the University of Toronto, where he established the Cameron Parker Holcombe Wilson Chair in Depression Studies. He was a member and chair of numerous boards, including Board Chair of the Mental Health Commission of Canada, and a Companion of the Order of Canada. 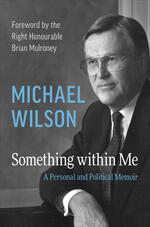