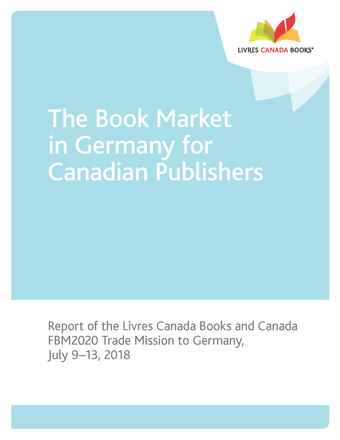 The Book Market in Germany for Canadian Publishers (2018)

Germany has the largest economy in Europe and the continent’s second largest population. It is known as one of the most prosperous and stable European book markets and a key gateway for international publishers seeking to sell translation rights to the rest of Western Europe. Frankfurt, the country’s financial centre, also hosts one of the world’s largest and most influential international book fairs.

In July 2018, Livres Canada Books, in partnership with Canada FBM2020, hosted a trade mission to Germany. The goal of the mission was for Canadian publishers to learn about the German market, meet German counterparts, and gather information to help steer Livres Canada Books’ and Canada FBM2020’s programs and services in the lead-up to Canada’s role as the Guest of Honour at the 2020 Frankfurt Book Fair.

The delegation consisted of 25 Canadian book publishing representatives who reflect the diversity of the book industry and are active in the German market. Accompanied by Livres Canada Books Executive Director, François Charette, and FBM2020 Executive Director, Gillian Fizet, delegates met with selected German publishers and potential partners in order to expand their understanding of this market.

Travelling in Berlin and Munich over July 9–13, 2018, the delegates attended presentations from various industry, national association, and government partner representatives from both Canada and Germany to enhance their knowledge of the different facets of the German publishing market. Delegates met with more than 100 publishers; visited bookstores, libraries and publishing houses; and held meetings with key German translators. They also visited the site of the Leipzig Book Fair, one of the oldest and most important book fairs in Germany. In addition, the delegation met with officials from the Embassy of Canada to Germany to discuss possible future support and to build upon the work and findings of the trade mission. The Embassy invited the German publishers who participated in the mission, acted as the point of contact between the Canadian and German participants, and organized the above mentioned activities. Thus, its efforts and involvement were instrumental to the success of the mission.

This report is a complement to the existing Livres Canada Books market guide, Selling Canadian Books in Germany (2015), the Mentoring Program on Germany (2017 and 2018), and the German mission briefing webinar held on January 22, 2019. More information on the German market and the 2020 Guest of Honour initiative can be found on the Canada FBM 2020 website. The goal of this report is to share experiences and information with publishers who did not take part in the mission. The report summarizes comments from members of the delegation and provides tips for Canadian publishers wishing to enter this market, key insights, and information on German book publishing, as well as examples of the kinds of business connections made and strengthened during the mission. Written shortly after their return from Germany and before the Frankfurt Book Fair in October of the same year, the publishers’ individual reports provide snapshots of the German market and the knowledge they gathered while they were there. The delegates met with a variety of German publishers, and their observations about the German market reflect a range of tastes and interests. The market has continued to evolve since the writing of the individual reports, and a number of the delegates have continued to report more sales of German rights after their return from the mission.

Following the success of the trade mission to Germany, Canada FBM2020 and Livres Canada Books have collaborated again with the Embassy of Canada to Germany to organize a Canada Stand at the 2019 edition of the Leipzig Book Fair (March 21–24). The Leipzig Book Fair is the second largest German fair after the Frankfurt Book Fair and is an essential event for the book industry. Canada’s attendance is especially important since the Leipzig Fair traditionally serves as a strategic location for the Frankfurt Guest of Honour to launch its literary programming. Moreover, attendance at Leipzig provides an ideal window for building on the knowledge and contacts gathered during the trade mission by learning more about the German market, the Guest of Honour program, making appropriate contacts, strengthening existing relationships, and discovering new business opportunities.