PAYAM AKHAVAN is a Professor of International Law at McGill University in Montreal, Canada, a Member of the International Court of Arbitration, and a former UN prosecutor at The Hague. He has served with the UN in conflict zones around the world, including Bosnia, Cambodia, Guatemala, Rwanda, and Timor Leste, and as legal counsel in landmark cases before the International Court of Justice, the International Criminal Court, the European Court of Human Rights, the Supreme Courts of Canada and the United States. His prior academic appointments were at Oxford University, University of Paris, the European University Institute, University of Toronto, and Yale Law School. He earned his Doctor of the Science of Jurisprudence at Harvard Law School, and his widely cited academic publications include Reducing Genocide to Law from Cambridge University Press. He served as Chair of the Global Conference on Prevention of Genocide, is a Founder of the Iran Human Rights Documentation Centre, and his groundbreaking human rights work has been featured on BBC World’s Hardtalk, CBC Ideas, Maclean’s magazine, Brazil’s TV Globo, and the New York Times. In 2005, he was selected by the World Economic Forum as a Young Global Leader. Payam Akhavan was born in Tehran, Iran, and migrated to Canada with his family in his childhood. 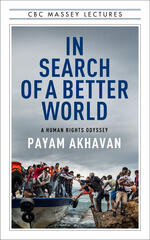 In Search of A Better World