James Barber (1923-2007) was best recognized as the host of the internationally acclaimed TV series The Urban Peasant. His best-selling books include One-Pot Wonders, Peasant’s Alphabet, Peasant’s Choice and Cooking for Two. He was a regular contributor to a wide range of publications including Pacific Yachting, The Globe & Mail, Western Living, Georgia Straight and the Vancouver Province. Barber died at the age of 84 on November 27, 2007, at his home in Duncan, BC. 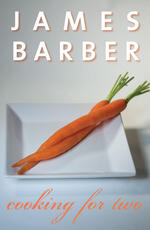