Severn Cullis-Suzuki has been an outspoken environmental and social activist since she was a child. At the age of nine, she founded ECO, the Environmental Children's Organization. Three years later, she and other members of ECO attended the 1992 Earth Summit in Rio de Janeiro, a UN conference addressing the fate of the world's natural resources, where she delivered a powerful plenary speech that was later turned into her first book, Tell the World. Shortly after, at the age of thirteen, she was awarded the United Nations Environment Programme's Global 500 award. She graduated with a BS in ecology and evolutionary biology from Yale and is pursuing a graduate degree in ethnobotany at the University of Victoria. She also co-founded the Skyfish Project, an Internet-based think tank that encourages youth to speak out for their future and adopt a sustainable lifestyle. 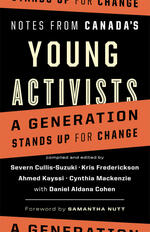