Margery Fee is a professor of English at the University of British Columbia, where she has taught Indigenous literature since 1996. Her most recent articles in that field appeared in What’s to Eat? Entrees in Canadian Foodways, edited by Nathalie Cooke, and Troubling Tricksters: Revisioning Critical Conversations, edited by Deanna Reder and Linda M. Morra. She co-authored the Guide to Canadian English Usage. 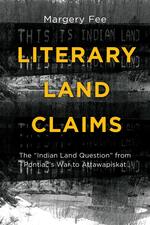