JULIE JOHNSTON is the author of five novels for young people, two of which won the Governor General’s Literary Award for Text in Children’s Literature. Her work has received numerous awards and accolades throughout North America, including the IODE National Book Award, the Ruth Schwartz Young Adult Book Award and starred reviews in such publication as Publisher’s Weekly, Quill & Quire and the School Library Journal. As If By Accident is her first novel for adults. The mother of four grown daughters, Julie Johnston lives with her husband in Peterborough, Ontario. 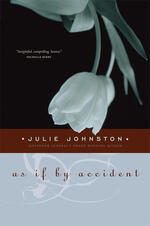 As If by Accident