Barry Kennedy grew up in Winnipeg before moving with his family to BC where he graduated from Royal Roads Military College to become a fighter pilot as part of Canada's contribution to NORAD. After succumbing to an irresistible literary fever, he began a new career as a writer, actor and standup comic. The author of three previous novels--Through the Deadfall, The Hindmost, and Rock Varnish--he currently resides in Toronto. 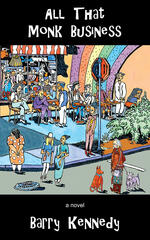 All That Monk Business