Larry Krotz is an award-winning writer, filmmaker, and author of five previous books, including Midlifeman and Tourists, which looks at how mass tourism is changing the world. Over the past 25 years he has travelled to a number of African countries, where he produced the documentary film, Searching for Hawa’s Secret, and wrote extensively for magazines and newspapers on scientific research and foreign aid projects. Originally from Winnipeg, he currently lives in Toronto. 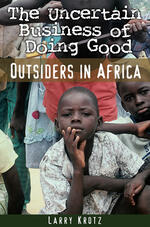 The Uncertain Business of Doing Good