Vincenzo Pietropaolo is an award-winning photographer whose work has been widely published in Canada and abroad. An Italian-Canadian, he and his family immigrated to Canada in 1959. He is the author of Celebration of Resistance: Ontario’s Days of Action (1999), Not Paved with Gold: Italian-Canadian Immigrants in the 1970s (2006), and Harvest Pilgrims: (2010), as well as many other books. In 2010 he was awarded the Cesar E. Chavez Black Eagle Award (Cultural) by the UFCW for his work photographing migrant workers and recording their stories. This work is the basis of Harvest Pilgrims. 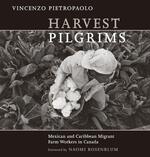