David Rome was the director of the Jewish Public Library (1953-1972). He became the national archivist and then historian of the Canadian Jewish Congress until his death in 1996. His last years were devoted to the compilation and translation of articles from Yiddish sources.Pierre Anctil has translated from Yiddish into French the memoirs of Israel Medres, Simon Belkin, and Hirsch Wolofsky. He is currently president of the Institut québécois d'études sur la culture juive and associate professor at the history department of the Université du Québec à Montréal. 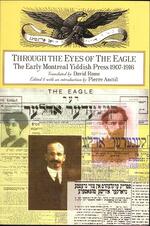 Through the Eyes of the Eagle