Tom Warner has been a gay activist for over thirty-five years. He got started in 1971 by helping to found the Gay Students’ Alliance at the University of Saskatchewan and, in 1971–1972, the Zodiac Friendship Society, which later became the Gay Community Centre of Saskatoon. After moving to Toronto in 1973, he helped to found the Gay Alliance Toward Equality and served as the group’s president from 1976 to 1977. Tom is the author of the widely acclaimed Never Going Back: A History of Queer Activism in Canada. 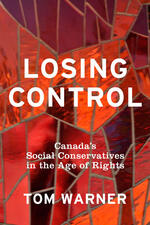