For more than three decades, British Columbia's old growth
forests have been a major source of political conflict. In Talk and
Log, Jeremy Wilson presents a comprehensive account of the rise of
the wilderness movement, examines the forest industry's political
strategies, and analyzes the inner workings of the policy process.

Wilson describes a number of major political battles, such as those
resulting in preservation of South Moresby, the Carmanah, and the
Valhalla wilderness, and investigates the factors that pushed the
government towards a more comprehensive approach to expanding the
protected areas system. He considers a wide range of forest policy
developments and assesses the effectiveness of government and industry
attempts to contain the wilderness movement. In the final part, he
explores the Harcourt NDP government's reform initiatives,
including the Commission on Resources and Environment (CORE), the
Protected Areas Strategy, and the Forest Practices Code.

Talk and Log illuminates the forces behind controveries
that have divided British Columbians, preoccupied the provincial
government, and drawn the attention of people across Canada and the
world. By discussing the patterns and trends underlying the past three
decades of wilderness politics, Wilson identifies the currents likely
to dominate B.C. wilderness debates in decades to come. 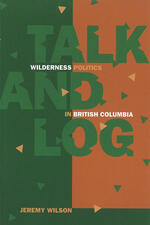