M.T. (Jean) Dohaney was born in the small village of Point Verde, Placentia Bay, Newfoundland. She moved to Fredericton in 1954, where she completed her BA in English at the University of New Brunswick. She holds both a MA and PhD in literature from the University of Maine and Boston University, respectively. In 1988, she released her first book, The Corrigan Women, which was followed by To Scatter Stones in 1992, A Marriage of Masks in 1996 and A Fit Month for Dying in 2000. 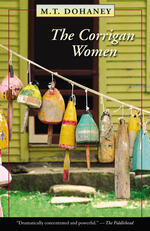