Silvia Federici is a feminist activist and scholar whose writing and political activities have contributed enormously to the broad Autonomist tradition. Known for her intellectual generosity, sharp, nonconformist thought, and searing critiques of capitalist society, Federici’s work has inspired the generation of social activists associated with the rise of the alter-globalization movement. 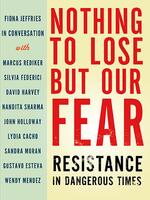 Nothing to Lose but Our Fear