Gail Scott is the author of Spare Parts (1981), Heroine (1987; finalist for the Paragraphe Hugh MacLennan Prize for Fiction; re-issued in 2019 with an introduction by Eileen Myles), Main Brides (1993; finalist for the Paragraphe Hugh MacLennan Prize for Fiction), My Paris (1999), Spare Parts Plus Two (2002), and The Obituary (2010; shortlisted for Le Grand Prix du livre de Montreal). Her essays are collected in Spaces Like Stairs (1989) and in La Théorie, un dimanche (1988) which was translated into English as Theory, A Sunday (2013). Scott is co-editor of the New Narrative anthology: Biting the Error: Writers Explore Narrative (2004; shortlisted for the Lambda Literary Award for Nonfiction Anthologies). Her translation of Michael Delisle's Le désarroi du matelot was shortlisted for a 2001 Governor General's Literary Award. A memoir, based in Lower Manhattan during the early Obama years, is forthcoming. Scott lives in Montréal. 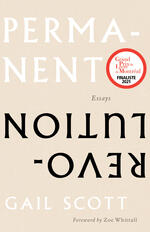