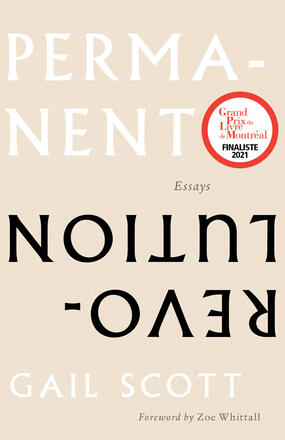 "A writer may do as she pleases with her epoch. Rage accumulates."

From iconic feminist writer Gail Scott comes Permanent Revolution, a collection of new essays gathered alongside a recreation of her groundbreaking text, Spaces Like Stairs. In conversation with other writers working in queer/feminist avant-garde trajectories, including l’écriture-au-féminin in Québec and continental New Narrative, these essays provide an evolutionary snapshot of Scott’s ongoing prose experiment that hinges the matter of writing to ongoing social upheaval. Scott herself points to the heart of this book, writing, “Where there is no emergency, there is likely no real experiment.”

With a Foreword by Zoe Whittall and an Afterword by Margaret Christakos.

"For those who are new to Scott's work, this collection will serve as an excellent introduction to an iconic thinker in the field of the feminist and queer avant-garde." —Toronto Star

"What is a tragic heroine? This is the sort of question behind the innovative trajectory of Gail Scott, a writer who has over the decades achieved the status of véritable icône of Montreal's literary scene. Her writing is shot through with a great expérience of life and a remarkable degree of wisdom. For her, "writing is a matter of ear: it is what one hears in words on the page that takes work out of the straitjacket of commodifying literary conventions." Her work is both humourous and érudite and her attention to the material aspect of language creates a spiral of thinking that is absolutely captivating, a spiral calling for Permanent Revolutions, as the title suggests, for Scott is not afraid to re-actualize her propositions. Radical and constantly curious, the intelligence at work in this collection of texts offers, as soon as one starts to read, an experience of resolute jouissance." —Jury Citation for the 2021 Grand Prix du livre de Montreal

"A state of permanent revolution is also a state of permanent questioning, of oneself and of one's surroundings. Scott's modes of questioning vary over time, but her concerns remain constant: feminism, queerness, class struggle, resisting capitalism and neoliberalism, the shape of sentences." —Montreal Review of Books

"It is fixity, above all, that Scott resists—on the level of politics, identity, and prose—meaning made singular and contained for the purpose of mastery alone. With Permanent Revolution, she creates a live text that does not strive towards closure or finality, but rather is experienced in its transience and becoming. Scott envisions an active meaning, sentence, and subject-in-becoming that wrestles in continuous interplay with the wider ecology around it." —Full Stop

"I can still remember the thrill of first entering the space of Gail Scott's novel, My Paris, a diary written all in present participles, the way I stumbled along the sentences as if around a city. In these essays, we get to travel through Scott's thinking through narrative, gender and queer aesthetics, from philosophizing her own experiments in prose to being in conversation with the écriture feminine of friends, from Nicole Brossard's Mauve Desert to New Narrative. She also writes through her literary foremothers, from Kathy Acker through the trilogy of the "masturbating French dykes" (ha!) (Irigaray, Cixous, Wittig) to Marguerite Duras. It was Duras's nonfiction I thought about when reading Permanent Revolution—profound and poetic, enacting the urgency of literature amidst the emergencies of now." —Kate Zambreno, author of Heroines and Drifts

"Permanent Revolution is written in the gap between what a novel could have been and what is possible now, and that's a kind of grammar. Reading these essays, I felt the part of me that never writes, but longs to, come back to life for a few moments and/or forever." —Bhanu Kapil

"At once erudite and intimate, Permanent Revolution is a vital set of meditations on difficulty and feminist art. Gail Scott convincingly and beautifully evokes feminism as an ongoing experimental practice: courageous, expansive, and necessary to all." —Anne Boyer, author of The Undying, Winner of the Pulitzer Prize for Nonfiction

"To experience Gail Scott’s écriture is to open yourself to 'a wild, titillating, ineffable excess.' Her 'community of sentences' are bodily gestures that we are folded together with, com-pli-cit. She gathers the noisy polyglossic surround of her city, 'wilfully fuck[ing]' the caesuras between torn and porous sentences and subjects. What seems at first the limits of articulation with proper listening becomes a beautiful threshold of social space. This book of essais, radical tries, charts Scott’s writerly formation at the nexus of Québécoise feminist fiction/theory and San Francisco queer New Narrative bodily spillage. No one writes quite like Gail Scott, and we all have so much to learn from her untameable work 'at a juncture of politics + excess.'" —Rachel Zolf

"In Permanent Revolution, Scott candidly addresses radical poetics, literary form, and social change while representing the queer and the political, as well as the necessity of a permanent revolutionary stance that embraces fluidity of identity, gender, and innovative narrative. It is a remarkable collection of valuable, groundbreaking essays." —Karl Jirgens, Canadian Literature 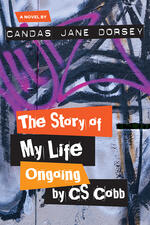 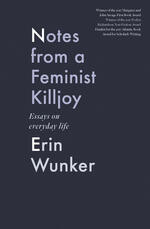 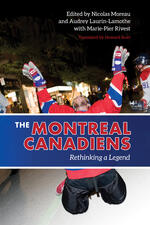 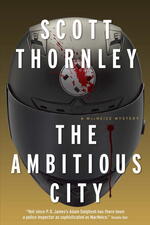 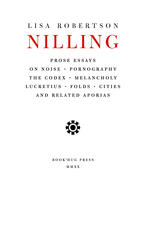 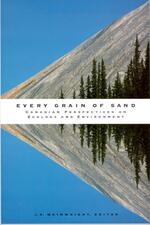 Every Grain of Sand 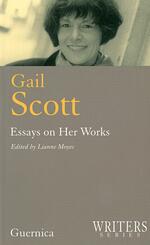 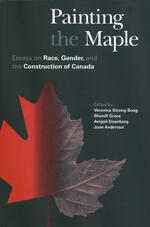