Roselynn Akulukjuk was born in Pangnirtung, Nunavut, in the Canadian Arctic. In 2012, Roselynn moved to Toronto to pursue a career in film and attend the Toronto Film School, where she fell in love with being behind the camera. After finishing her studies and working in Toronto, Roselynn returned home to Nunavut, where she began working with Taqqut Productions, an Inuit-owned production company located in the capital of Nunavut, Iqaluit. Part of Roselynn’s love of filmmaking is the ability to interview elders, listen to their traditional stories, and share them with the world. In 2015, Roselynn wrote and directed her first film, the live-action and puppetry short The Owl and the Lemming, on which her book by the same title is based. Her film won Best Animation at the 2016 American Indian Film Festival. 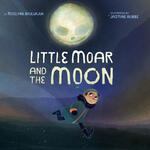 Little Moar and the Moon