Don Bell, aka The Bookman, was a writer and antiquarian book dealer who lived in Montreal, Paris and Sutton, Quebec. A recipient of a National Magazine Award, he also received the Stephen Leacock Award for Humour in 1973 for Saturday Night at the Bagel Factory (M&S). Don Bell's column, Founde Bookes, appeared in Books in Canada until he died in 2003. 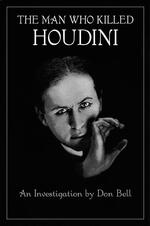 Man Who Killed Houdini, The