Kathy Calvert grew up in the Canadian Rockies. In 1974 she became one of the first female national park wardens in Canada; in 1977 she was a member of the first all-women expedition to Mount Logan and in 1989 was on the first all-women ski traverse of the Columbia Mountains from the Bugaboos to Rogers Pass. She is the author of three books: Don Forest: Quest for the Summits (RMB 2003), Guardians of the Peaks: Mountain Rescue in the Canadian Rockies and Columbia Mountains (RMB 2006) and June Mickle: One Woman's Life in the Foothills and Mountains of Western Canada (RMB 2015). She and her husband, Dale Portman, live in Cochrane, Alberta. 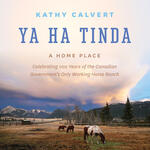