Born in Montreal in 1935, Robert Leonard Dallison attended both the Royal Roads Military College and the Royal Military College of Canada and, following graduation in 1958, was commissioned into the Princess Patricia's Canadian Light Infantry. He received a BA (history) from RMC and a BA (history and international studies) from the University of British Columbia. He served for thirty-five years with the Canadian Army, obtaining the rank of lieutenant-colonel, and ending his career as chief of staff of the Combat Arms School at CFB Gagetown. After retiring, he maintained his life-long interest in history and heritage, including serving as the President of Fredericton Heritage Trust and as the New Brunswick representative on the Board of Governors for Heritage Canada. From 1992 to 2002, he was director of Kings Landing Historical Settlement. Retired again, he is currently living with his wife Sharon in Fredericton. 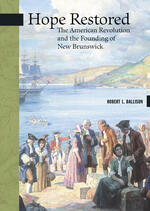